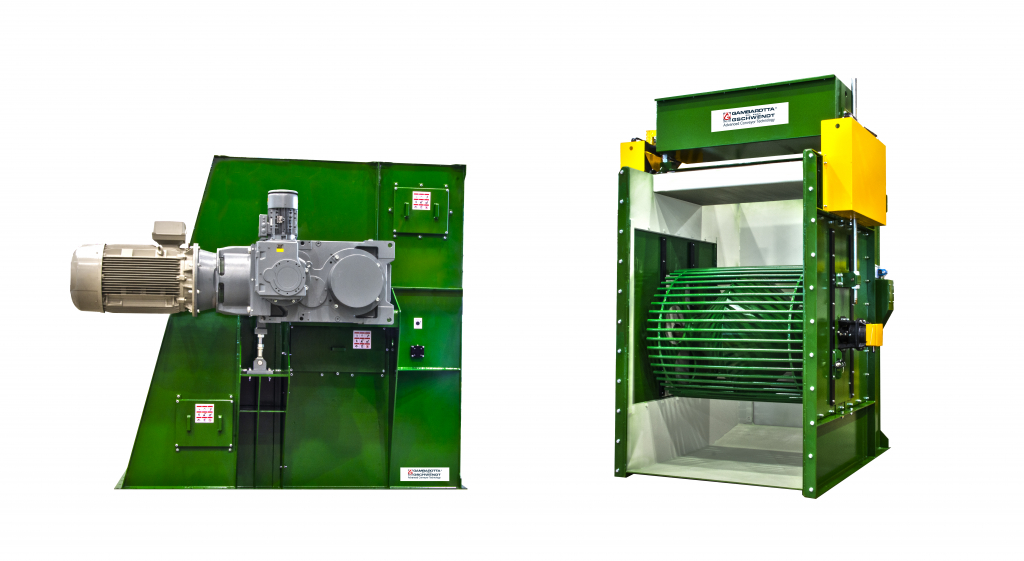 The bucket’s dimensions (litres), pitch (bucket centre distance) and lifting speed determine the volumetric capacity or lifting capacity for an elevator (cubic metres per hour). The shape of the bucket’s side influences the maximum speed that can be reached in a peripheral unloader with any given upper drum diameter, to avoid excessive recycling of material that falls towards the bottom of the elevator. So, the bucket’s parameters – shape and size – upper drum diameter and lifting speed are carefully selected.

The company has conducted research on the shape and size of the buckets to maximize the capacity of each elevator.

This was carried out using a special test lift, present in both tests and inspection areas of the workshop, which allows the variation of lifting speed. Flow tests were carried out on various models of buckets with different profiles and sizes using various speeds.

The company’s philosophy regarding speed is to limit its value for reasons of greater safety of good operation and less wear and tear in order to maximise operating reliability.

For larger EVNs the speed was limited to the maximum value of 1.6 m/sec (96 m/min), while the increase in the size of the buckets was favoured, thus obtaining exceptional flow values and a containment of the costs of the buckets for the smaller quantity.

The result for this research led to the identification of a series of Super buckets (buckets “S”) used from the elevator size of 315 up to the size greater than 1800. The size of an elevator corresponds to the measure in millimetres of the width of its bucket.

With these buckets “S” the larger EVN lifts, those with a size equal to and greater than 800 have a useful coincidence of two numbers. The maximum lifting capacity, at a speed of 1.6 m/sec. and bucket filling of 75-77%, is easy to memorise.

The number that espresses the size (800,1000,1200, etc) also espresses their maximum flow rate in cubic metres per hour.

EVN elevators with a size equal to and greater than 1000 are made with two rows of mounted bucksets offset from each other. In this way, the buckets adapt better to the drums’ camber, the flow of material to the discharge is more regularised and the pulsating efforts of the dredging material at the base are reduced.

The belt is undoubtedly a crucial element of this type of bucket elevator, and that contributes to determining its fundamental reliability.

The belt used in the EVN is supplied by an International supplier in accordance with the specific characteristics required by the company’s designers, which entail a multi-layer textile structure type only for very small elevators. In almost all cases, the belt has a resistant metal structure (steel cord belt) for two reasons: high load capacity and limited elasticity. The high load capacity is indispensable for elevators of large capaciy and those with considerable wheelbase.

High capacity elevators of 1500 m3/h and more, are required, for example, in:

The metal structure is made up of main longitudinal warp cables, designed to support the load due to be transmitted, and a transverse “weft” , which gives strenght to the anchoring of the buckets to withstand their concentrated loads. The metal structure, to which the efforts are entraste, is immersed in several rubber layers calendared on it during the construction of the belt. The rubber (a mixture of natural rubber with suitable additives) has the task of encapsulating and protecting the  metal part and of constituting an element with a high coefficient of friction, very useful for towing by the drum of the control station.

The strenghts and weaknesses of the rubber belt include:

According to the above, the company provides its EVN bucket elevators to be used in the lifting of fine or small particle size materials that have temperatures not higher than 150°C

The standard joint (Figure 2) of the belt is mechanical and made up of three elements in aluminium alloy: two external specular jows and a “Y” centred body to be joined by two sets of bolts with special crews self-drilling screws.

The union of the two ends of the belt is carried out at the customer’s site, after mounting the body of the elevator and its two drums. The lower drum is positioned in the upper area of the tension stroke

The joint is made above the upper dream (Figure 3). By means of special equipment, the external bolted jaws block the two estreme edges of the belt positioned between them and the central “Y” body.

Thanks to their conical threaded tip, the special crews, guided by the mechanical joining holes, pierce the belt in the right area that allows a result to be able to exploit the entire tension of the belt running during his exercise.

For elevators with demanding height, generally above 50-60 m of wheelbase, there is a special joint formed by the standard joint integrated at the rear by an additional safety clamp consisting of three pieces which have a corrugated contact surface.

In this last zone the ends of the belt are stripped of the rubber cover to act with a clamping action on their metal structure.

To avoid the lateral sliding of the belt it is necessary to find a “correct position” of the axis of the lower tension drum. Often this position is not perfectly horizontal as it must be that of the axis of the upper control drum. The position must however be mantained during the excercise despite the elongation over time of the belt.  For this purpose, Gambarotta Gschwendt uses a special parallel tensioning systemmade up of a pair of pantographs with counterweight. The latter costantly mantains the desired voltage value over time in “automatic” mode.

Gambarotta Gschwendt is always committed to producing machines of great strenght, durability and above all maximum reliability

This site uses cookies, including third-party cookies, to offer you a better browsing experience and send you advertisements and services in line with your preferences. By closing this banner or continuing to browse by clicking outside it you consent to the use of cookies. To learn more or to change your cookie preferences, see our Cookie Policy.